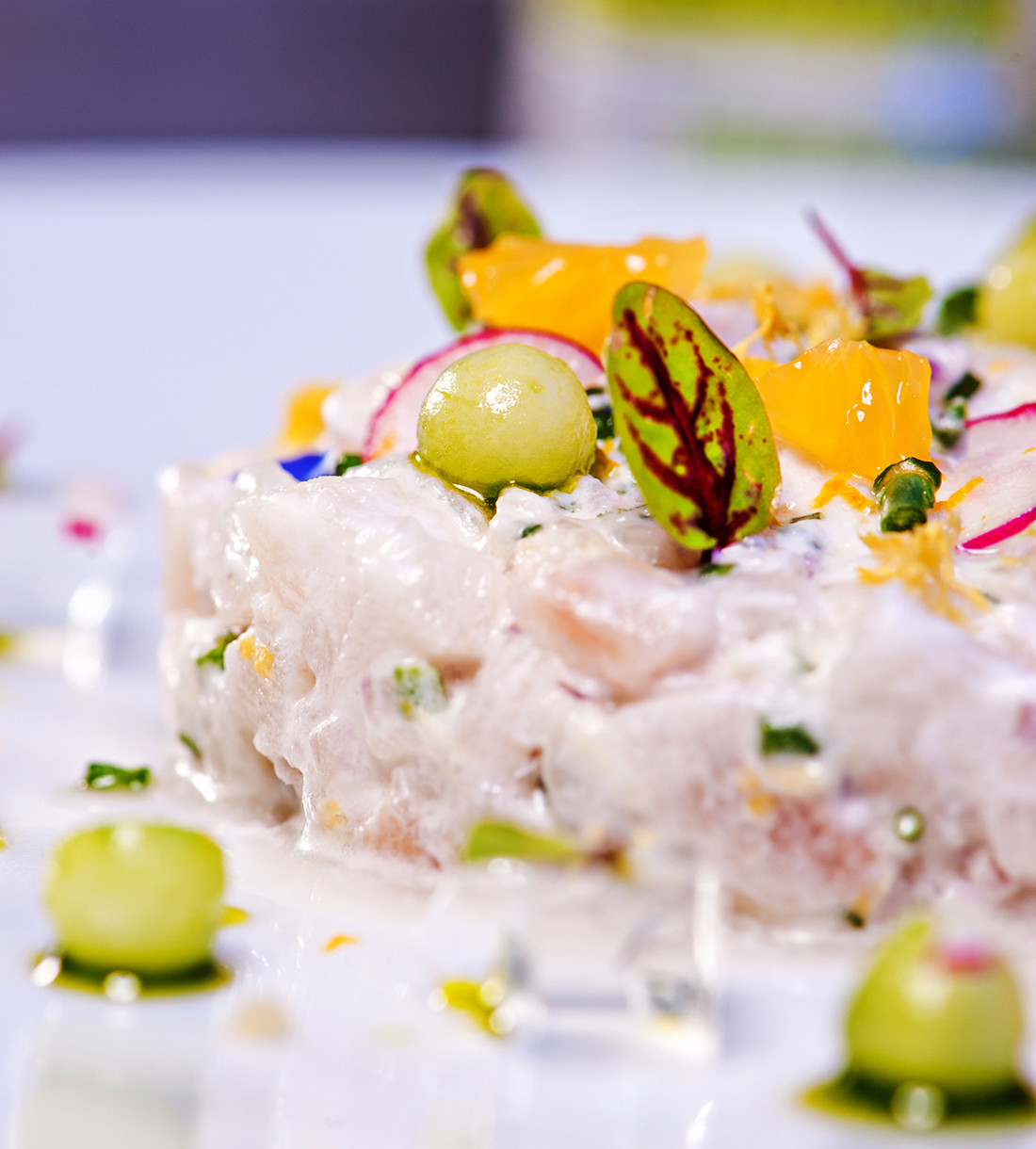 Soak the gelatin sheets in a bowl of cold water to soften them.

Meanwhile, pour a quarter of the bottle of ARTONIC Cucumber Tonic Water into a small saucepan and bring to a simmer.

Drain and squeeze out the jelly, then melt it in the pan off the stove. Lightly whisk and then add the rest of the ARTONIC while mixing. Pour the preparation into a deep dish and place it in the refrigerator.

Remove the skin from the sea bass fillet. Cut it in half lengthwise. Cut 3 strips in the thickness of each piece. Cut those pieces into thin strips, then dice. Place them in a bowl.

Using a microplane grater, grate over the fish the zest of the lime and the ginger. Season with olive oil and two tablespoons of ARTONIC Cucumber Tonic Water. Mix and cover with cling film. Set aside in the refrigerator.

Peel the cucumber and using a small melon baller, make about forty balls.

Season them with salt and keep cool.

Chop the chives, peel the orange and separate into 6 sections then cut those into very small pieces.

Cut the radishes into thin rounds, season with salt and put them in the fridge. Take the ARTONIC jelly from the fridge and cut it in its dish using the tip of a knife.

Season the sea bass with salt and pepper, squeeze the lime over it through a colander. Then add three quarters of the cucumber balls and the chopped chives.

Mix everything and adjust the seasoning and the acidity with lemon juice if necessary.

Place the tartare in the center of the plates with a spoon and using a 6 cm round food ring. In a bowl, combine the remaining cucumber balls and the radish rings and the orange segments. Season with a drizzle of olive oil.

Divide everything harmoniously over and around the tartare. Finish by adding the cubes of ARTONIC Cucumber Tonic Water gelee and a drizzle of olive oil. 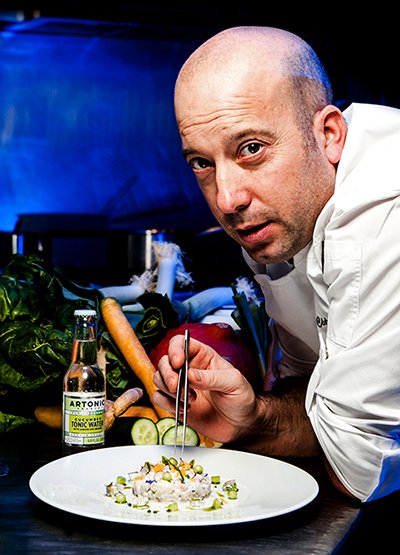 Originally from the Tarn, the seventeen years of experience acquired in gastronomic cuisine around the world in prestigious establishments have enabled Cédric Coulaut to combine rigor, creativity, a taste for a job well done and respect for quality products.

Cédric has had the privilege of being part of the teams and benefiting from the know-how of great chefs:

After having been successively Chef de Cuisine of the gourmet restaurant of the Four Seasons Hampshire in England, and at the Château de L’Yeuse in Cognac, Cédric wanted to give a new meaning to his cuisine, and have it discovered and shared in a different way, by creating in 2017 Expérience Sur Mesure with his partner sommelier Oriane Chambon. Expérience Sur Mesure creates exclusive and original culinary events in the private and public sector.

Together, they have selected ARTONIC not only for its qualities on the pallet for tastings but also in the creation of innovative cuisine recipes, such as the line-caught sea bass tartare with a gelee made from ARTONIC Cucumber Tonic Water.