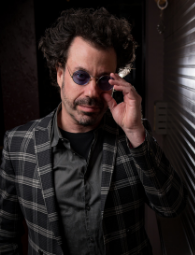 In addition to touring and recording six albums with his cult-favorite rock band Oh My God, pianist/composer Johnny Iguana has toured with blues greats Junior Wells and Otis Rush, played on albums with Buddy Guy, Johnny Winter, Mick Jagger, Lil’ Ed, Billy Boy Arnold, Keb’ Mo’, Gary Clark Jr. and more. He has played on Grammy-nominated albums with Junior Wells, the Muddy Waters 100 Band and Chicago Blues: A Living History and has performed everywhere from Beirut to Buenos Aires to Japan to the Montreux Jazz Festival. He has released five albums with his acclaimed « garage cabaret » band the Claudettes and made his blues debut as a leader in 2020 with « JOHNNY IGUANA’S CHICAGO SPECTACULAR!’ (Delmark Records). Johnny grew up playing everything from classical to punk to the soul-jazz he heard growing up in Philadelphia (before moving to New York City and then Chicago), and incorporates all that and more into his compositions.

The inspiration for composing Artonic Rhapsody came after seeing the short effervescent video on the Artonic website.

BACK TO THE COMMUNITY